Birds of a Feather Living Together 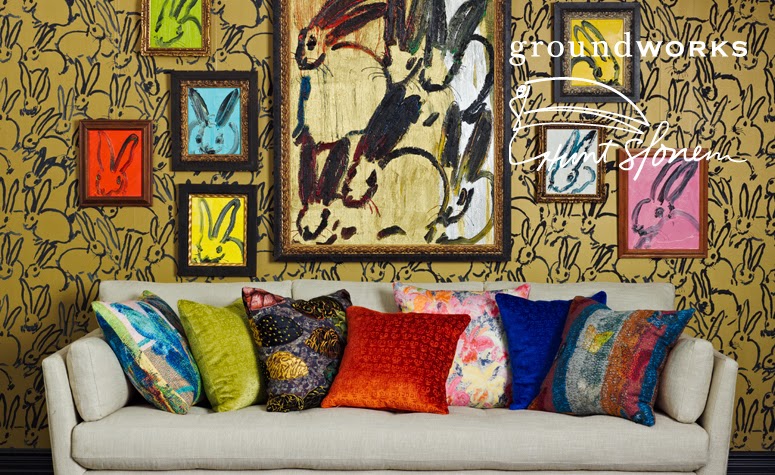 More is More in Hunt Slonem's world!  Best known as a Neo-Expressionist, Hunt's childhood spent in Hawaii and a year spent studying abroad in Nicaraqua had a profound effect on the direction this artist's career would take.  Hunt developed a passion for orchids and owned a menagerie of animals which became influential muses that informed his subject matter, but maybe none more than the rabbit; he having been born in The Year of the Rabbit. 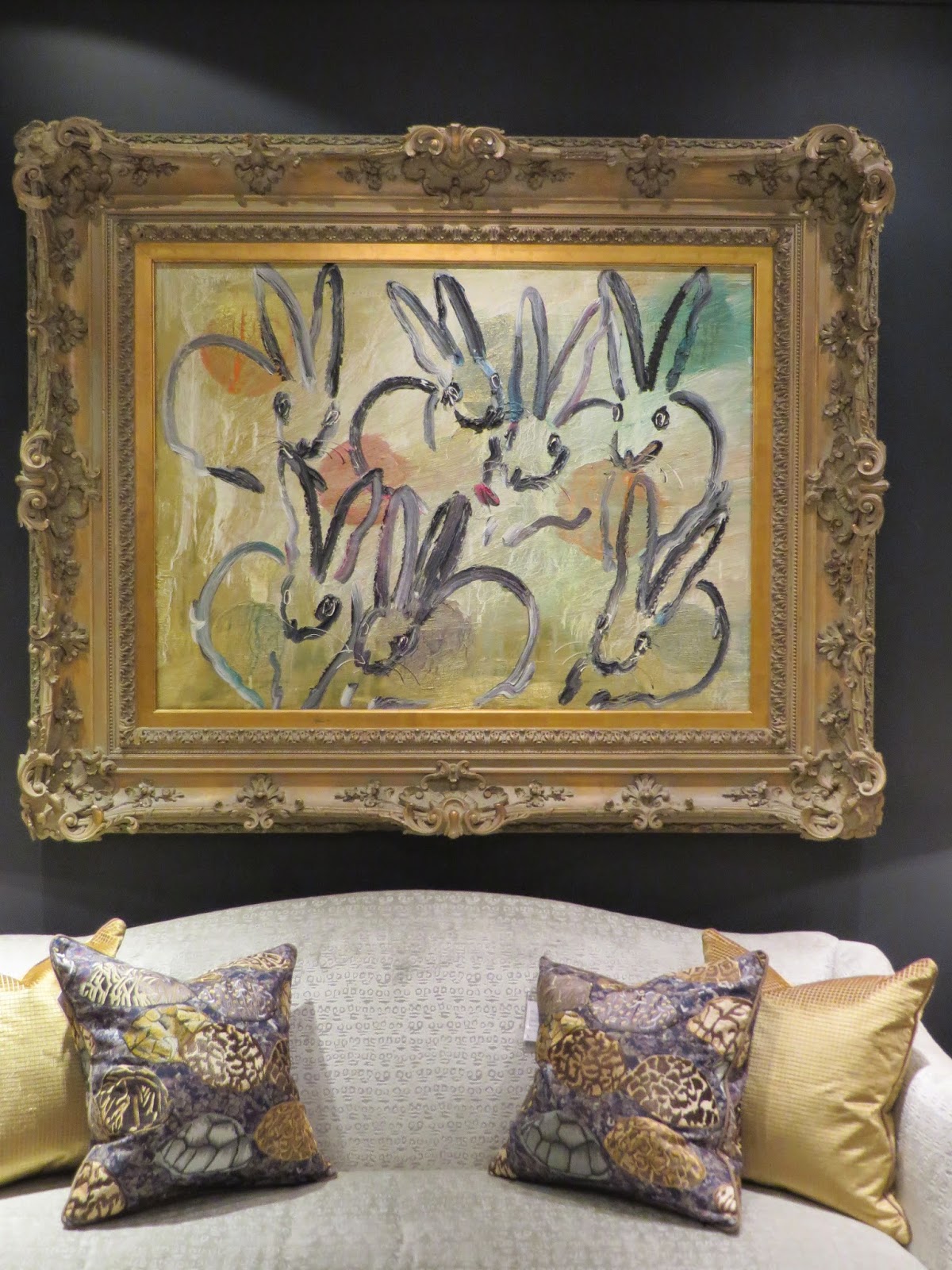 With his aviary of 70 plus birds serving as his inspiration and living and working in his extraordinary New York Studio, (Hunt also has homes in Louisiana and Upstate New York) this man melds many worlds. 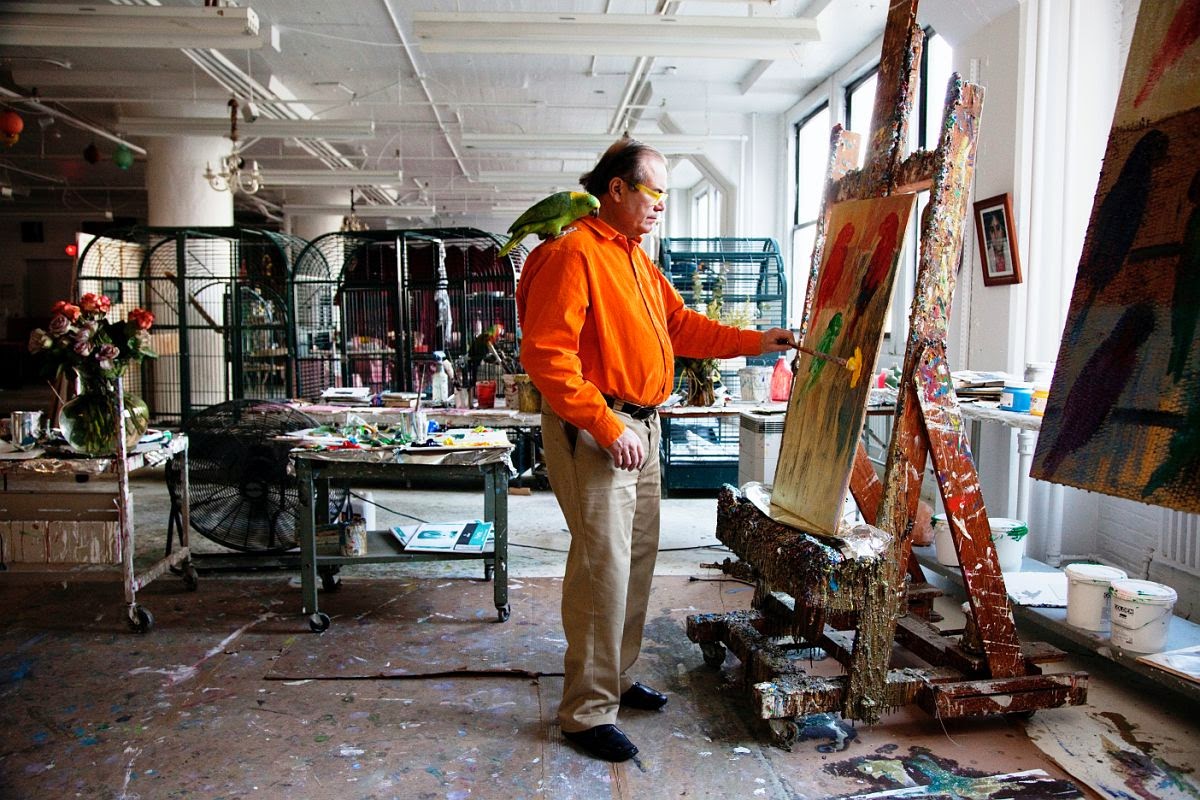 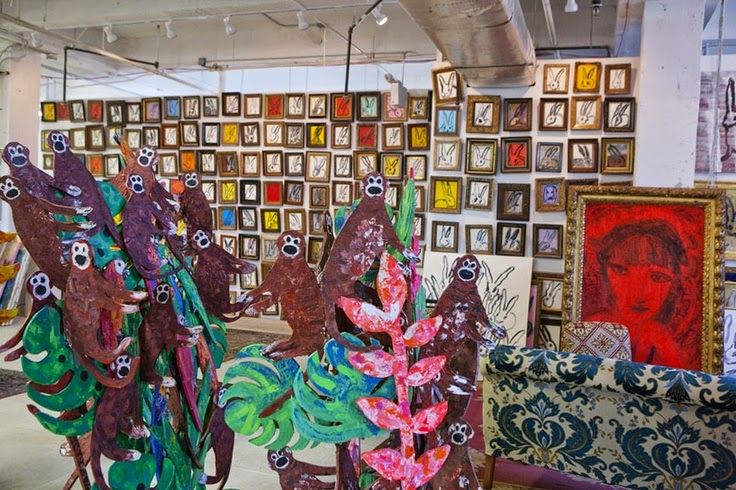 When I heard he was doing a fabric, wallpaper, and carpet collection for Groundworks thru Lee Jofa, I was intrigued.  How will all those birds, bunnies, and butterflies translate?  Apparently, beautifully!
Slomen, working with the team at Lee Jofa, experimented for two years to get the exacting color saturation, complexity, and depth of field required to have Hunt's menagerie translate as magnificently as it does.  It is not kitchy or childlike, as one might initially think.  It's quite sophisticated, and in the case of the Hutch Gold wallpaper (below) with its matte background, it is downright regal! 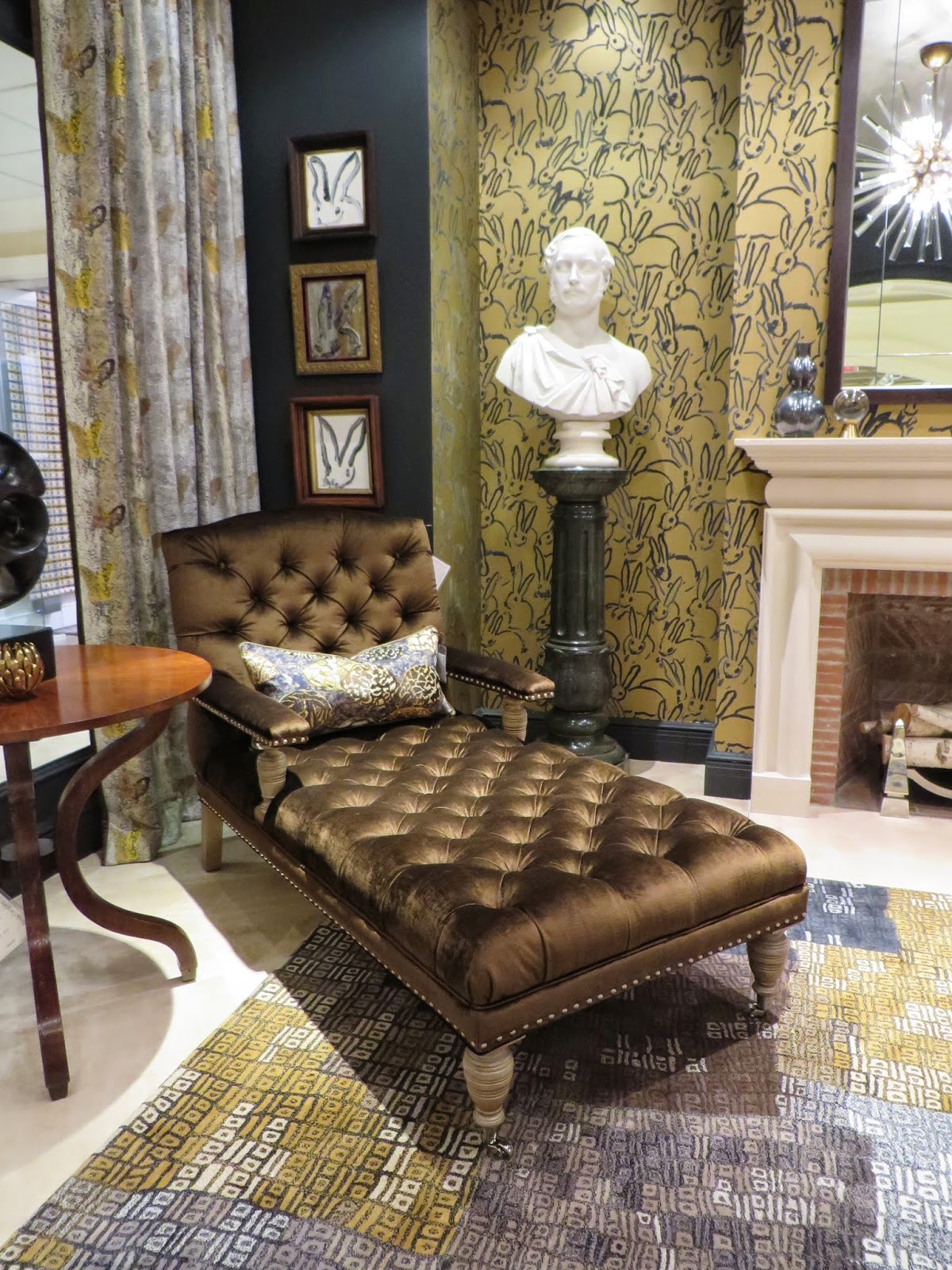 The Star of India fabric, in neutral linen with appliquéd velvet and embroidery, was inspired by a tortoise that was a former pet and a large sapphire jeweled tortoise that was said to have been carried around by a Maharani in the foothills of the Eastern Himalayas for good luck. 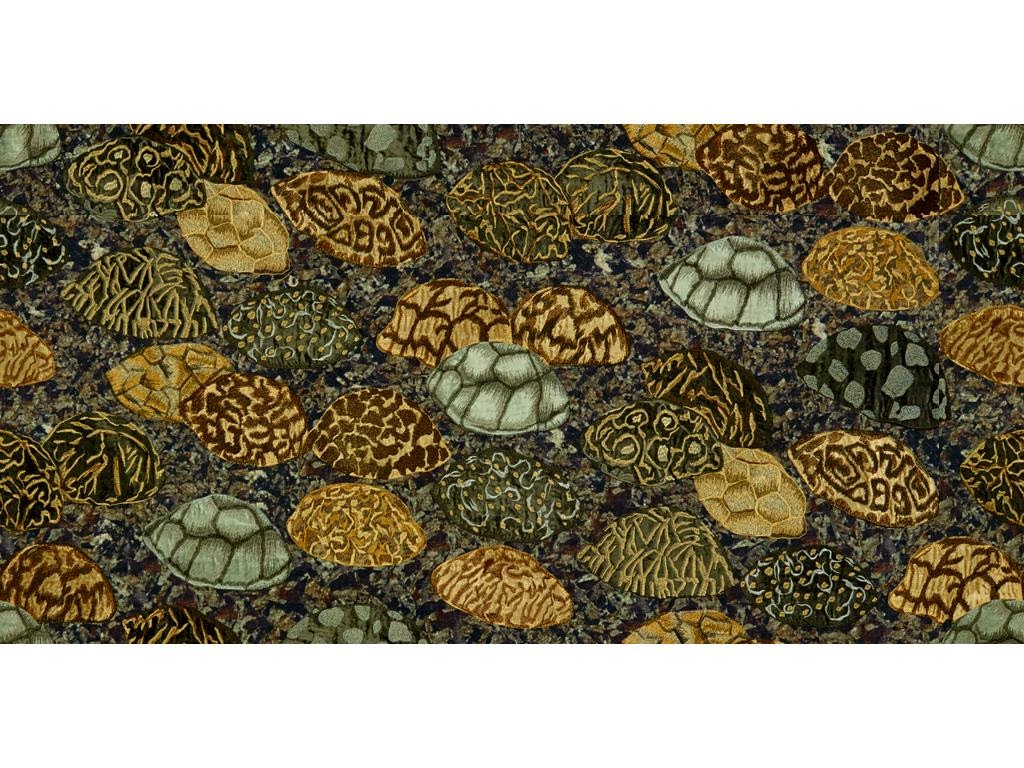 Frittilery, in multi-colored layers of embroidery woven to mimic a cross hatch technique (which could  be interpreted as the cages these birds and animals might find themselves in), were collected and studied by Slonem as a youngster . 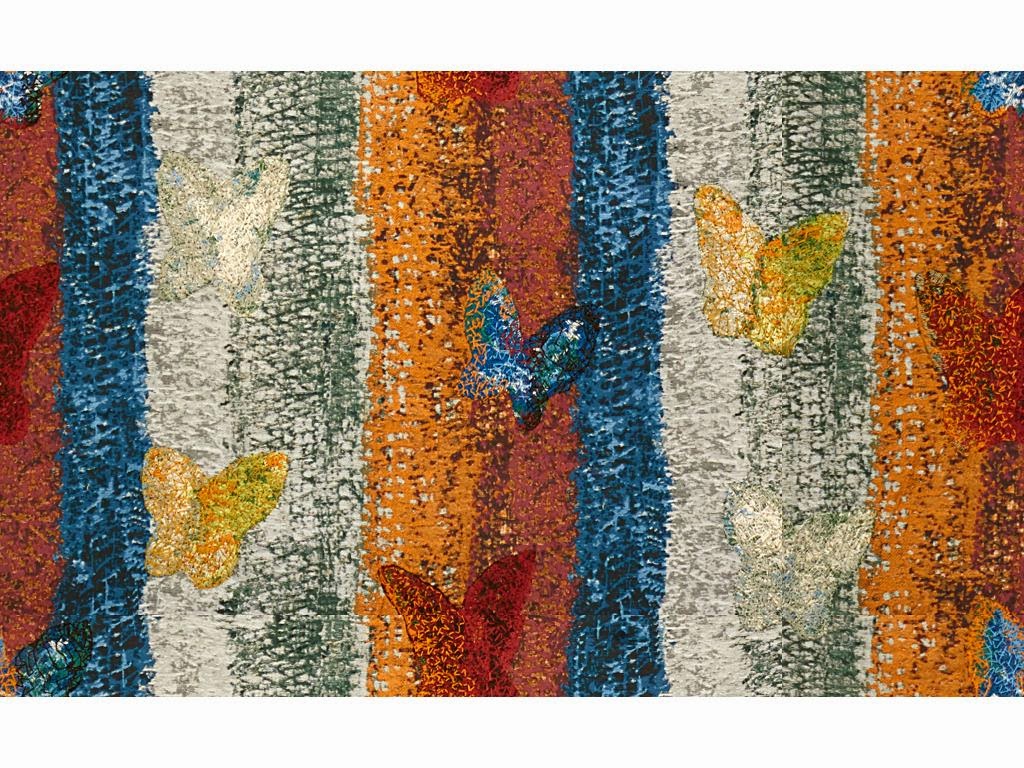 The collection translates beautifully from neutrals to energetic brights.
Monkey eyes and mouths are reduced to an interesting graphic design in the customizable carpet collection that was inspired by portraits of Frida Kahlo, where she often posed with monkeys.  They are also a symbol of protection.  The floor bunnies become more of an art installation. 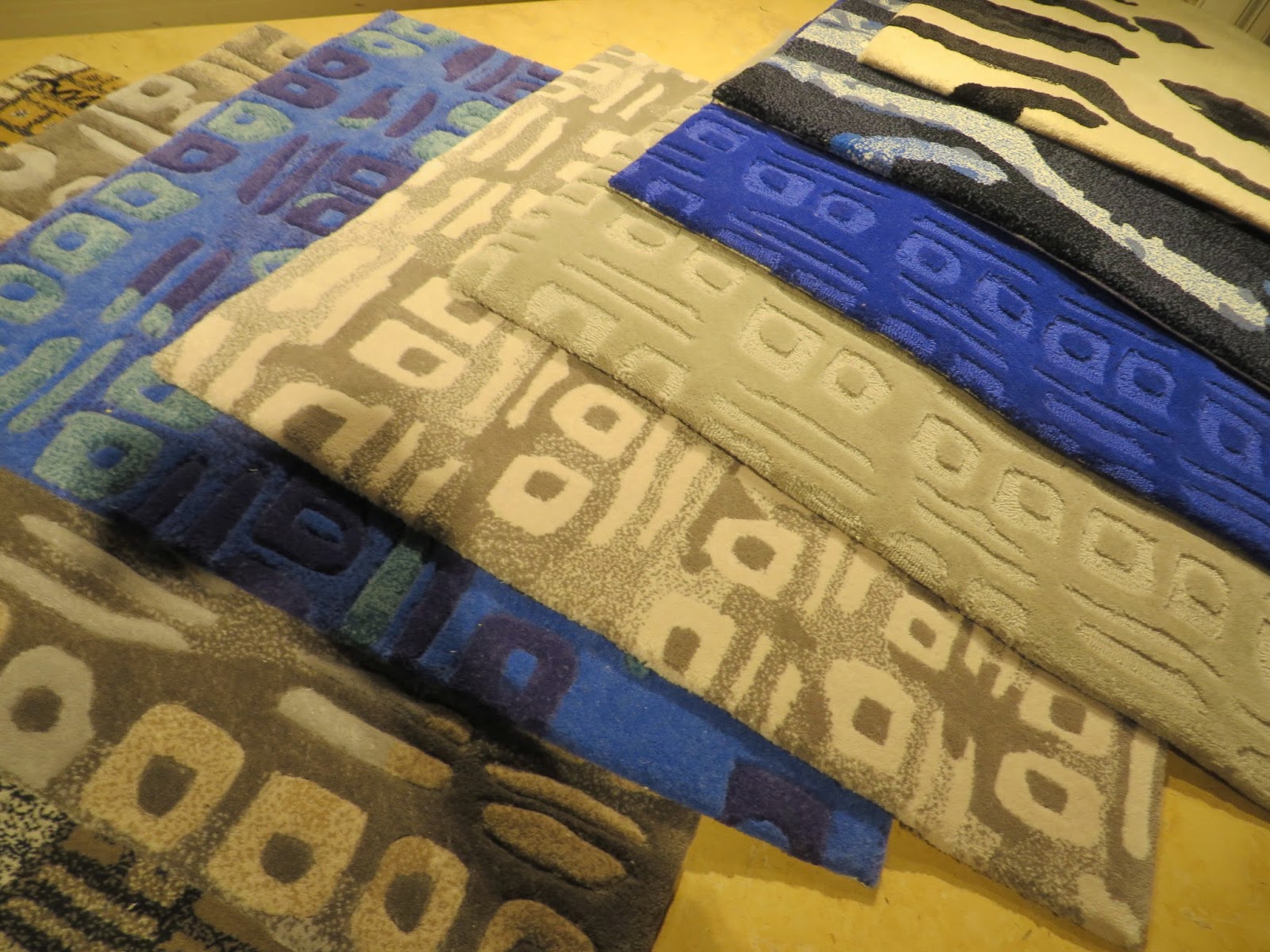 There is a fluidity to his process.  Everything evolves, as opposed to "being designed."  He is a brilliant colorist with a strong need for a historical connection which led him to coin the term "collectorating."  He is an enthusiastic collector and decorator.  "He is energized by the act of creating settings with his collections which in turn fuel his work."  And I understand he hosts great parties in his studio. 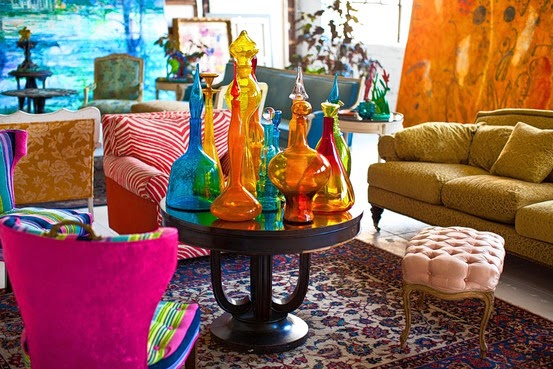 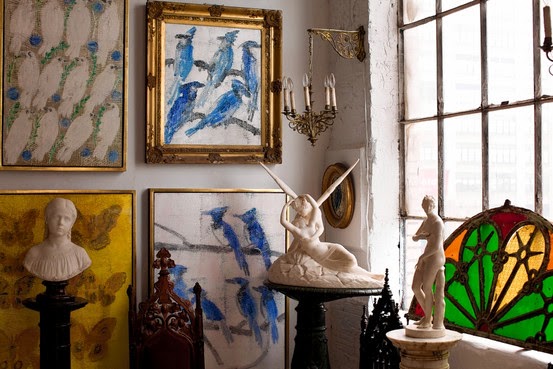 Slonem's birds and butterflies symbolize the soul and spiritual liberation, as in a metamorphosis.  A fascination with these creatures as well as a menagerie of others captured Hunt's imagination and a spiritual life and visual life collided.  The repetitive imagery is like a mantra or meditative experience.  A stillness sets in.


For a little bit of happiness, check out Hunt's book, Where Art Meets Design showcasing his own homes and the magic that happens when art and design intersect colorfully. 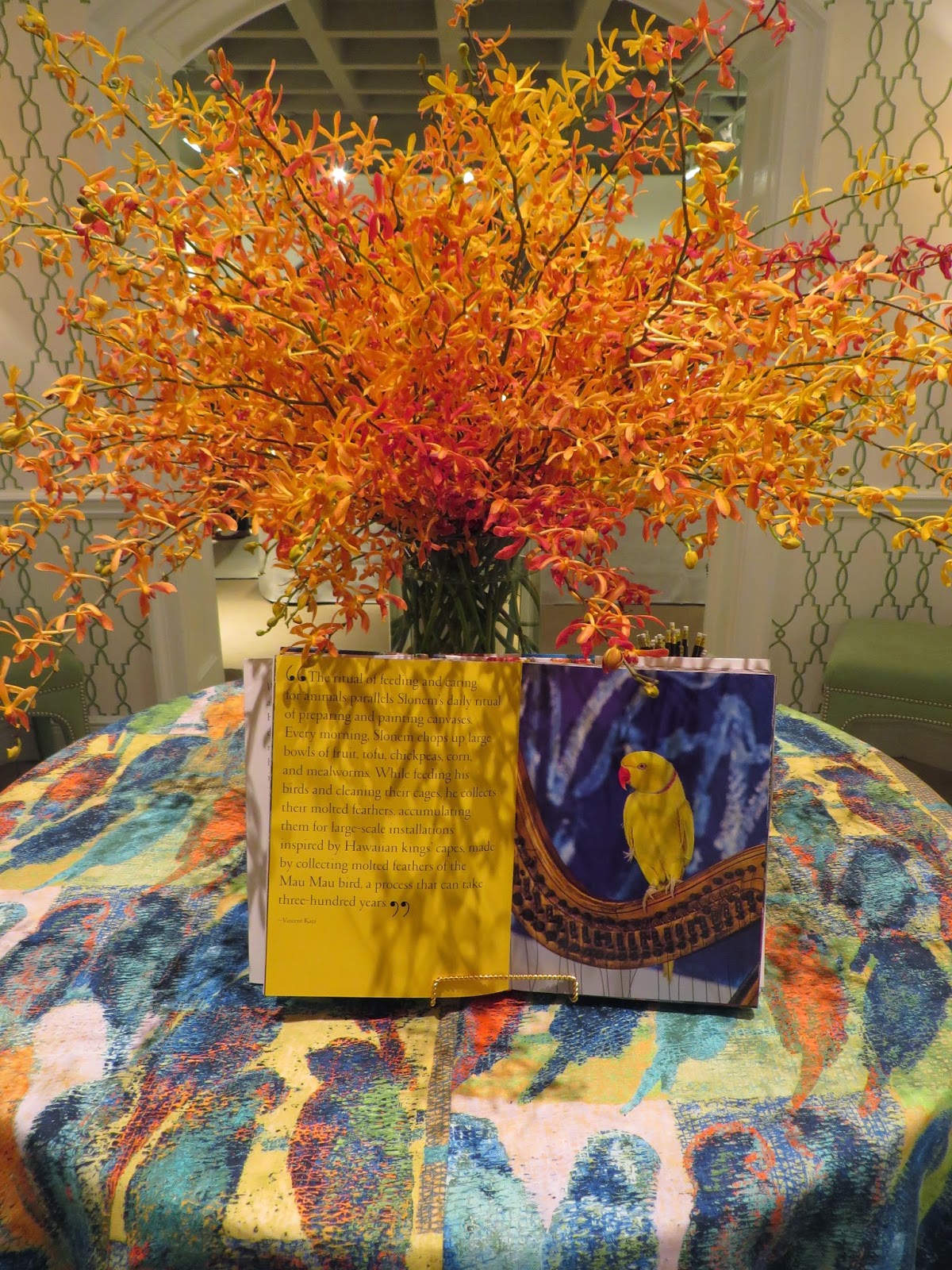 The collection really reflects Hunt's joie de vivre attitude!  How do you want a room to make you feel?  Hunt thinks Happy!