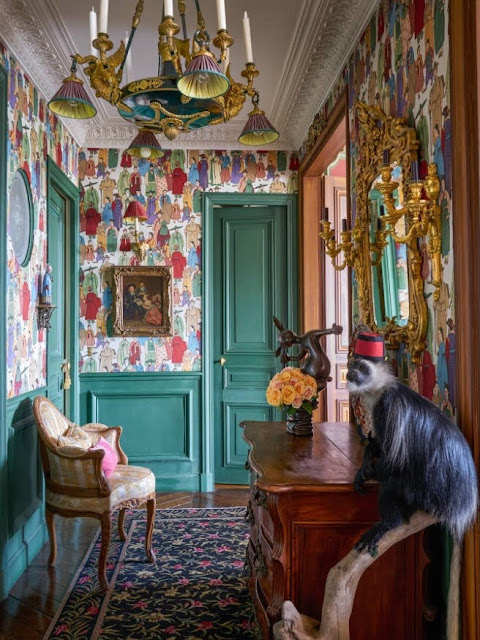 I was going thru a past issue of Elle Decor and this caught my eye, in a story titled, Flights of Fancy:

"When an adventurous Californian fulfills her lifelong fantasy of owning a pied-à-terre on the Seine...."

"Pas possible" said the real estate agents when Pamela Mullin told them of her fantasy of having  a place in Île Saint-Louis.  The impossible became possible!

I want to hear about anyone living out their dream, especially when it involves a pied-à-terre AND Paris!  She must be a colorful character because her apartment sure is.  Can you imagine walking through the front door, what your first impression must be? 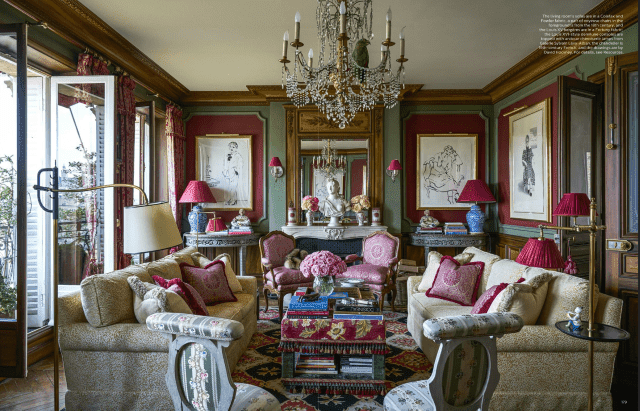 It's exuberant, it's whimsical and it's full of period furniture probably worth a king's ransom.
There is a joie de vie to the decor, the color, the taxidermy, the Hockneys (paintings above) that remind us to not take life to seriously.

The view of Notre Dame is to die for! 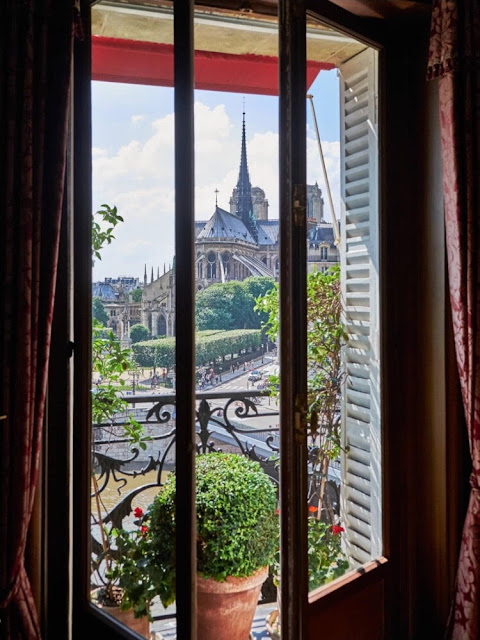 The article explained that Pamela had had a difficult childhood.  She came to America from Scotland with nothing.  She worked hard, then married a successful entrepreneur.  When that marriage come to an end and her children were grown, she decided it was time for an adventure, and it was to begin in prestigious Île Saint-Louis, an island in the River Seine in the center of the city.  I like the way this woman thinks! 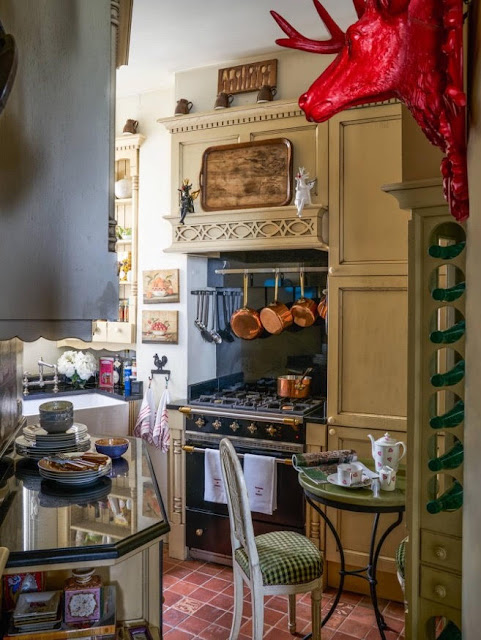 When she found the apartment, it looked like it had not been lived in for quite a while.  For the next few years, Pamala embarked on the renovation herself.  With the help of friends, antique dealers and artists, small rooms were enlarged, the ceiling was lifted, pieces were accumulated from high end  stores as well as flea markets, but it wasn't perfect.  She sought out color expert Jean Parrot and hired interior designer Didier Benderli.  Together they injected the apartment with a jolt of energy.  Now it truly expresses Pamela's joie de vivre. 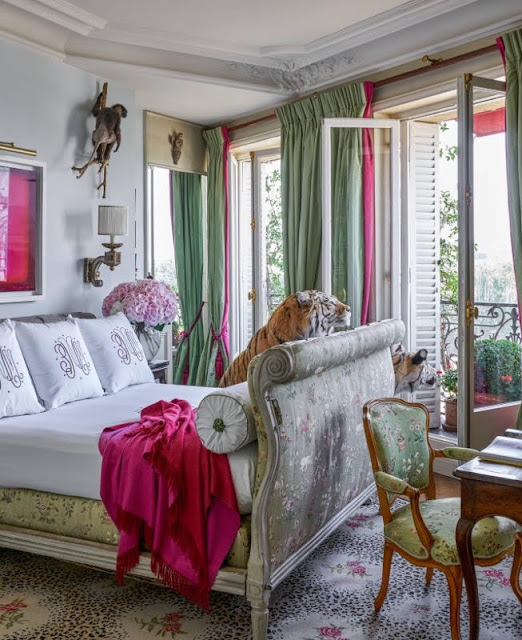 Another extraordinary view ~ the Parthenon, outside the bedroom window, OMG!  The (stuffed) tigers, from Deyrolle, seem to like it.  Pamala's life on this little island is fanciful and joyous.

Pinocchio sculpture by Hubert Le Gall.  I love how it is completely unexpected resting on the 17th century desk. 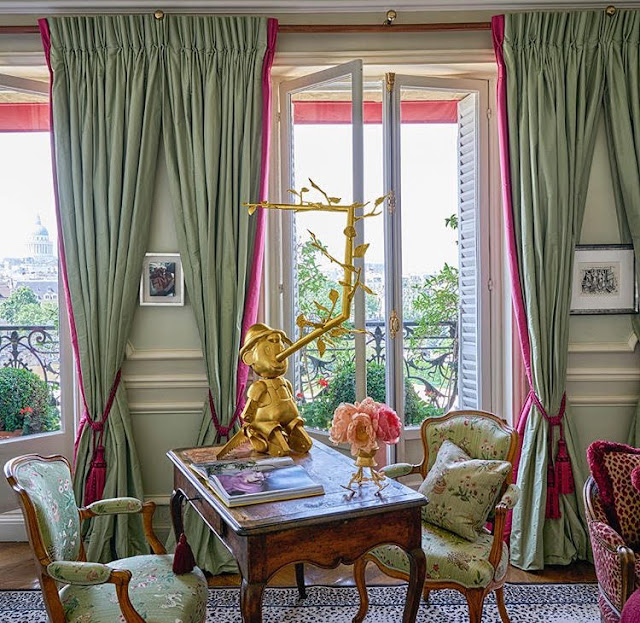 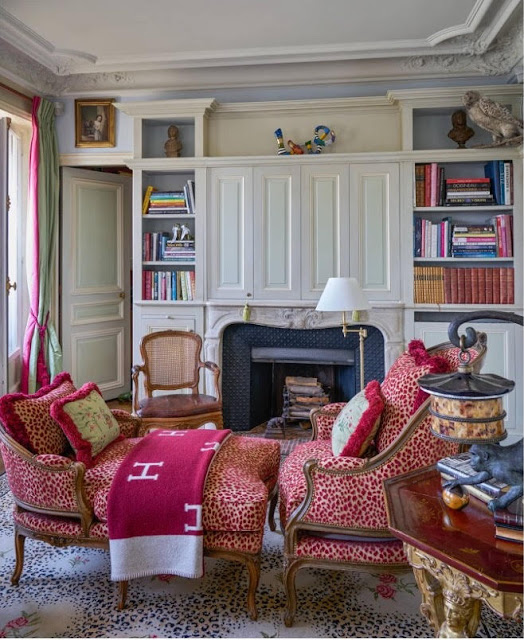 The tiny jewel box of a guest bedroom fully upholstered in a Pierre Frey fabric with custom bed and French and Dutch furniture is fit for visiting royalty. 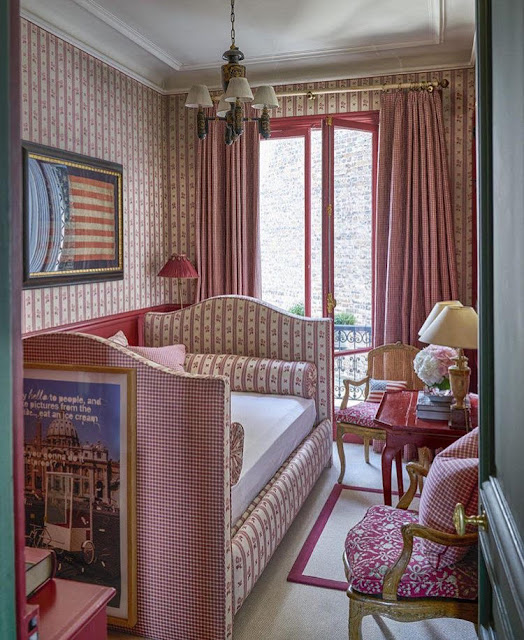 Hold your dreams close ~ for they just may become "pas possible."

What dream do you hold close?